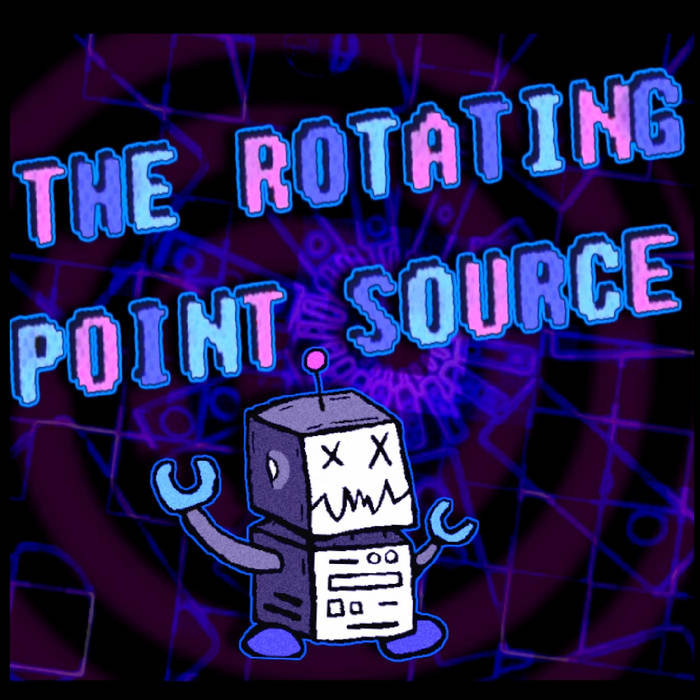 The Rotating Point Source is an energy filled rock band, featuring melodic vocal harmonies, driving guitars, and the sounds of synth, hip hop, and experimental punk rock. Really, the band is just four best friends who love to party. Michael Cardinal, Eric Luedkte, and brothers Brandon and Bryan Keenan all met in Statesboro, GA during their freshman year at Georgia Southern University back in 04’ (when they were 18), and jammed out after the very first day of classes. The rest is history.

After the guys finished college and ended up in Kennesaw, GA years later, the previously acoustic band made the decision to go fully electric, and finding new energy, started playing at clubs, bars, and all night parties hosted at the infamous "Skull House."

The Rotating Point Source's self titled debut album was produced by Mark Spurlock of the legendary Athens band "Dr. Squid", and features the most superior quality versions of the band's best work to date. So do yourself a favor, and listen to this album... today. Like, what could possibly be more important?!

Track Name: Time to Play
When she comes back around,
I cannot make a sound,
My girl’s comin back to town,
And we’re gonna get down.

And we’re dancing now,
And I don’t know how,
Things ever got this way,
Her hands slide down my thighs,
I catch a glance in her eyes,
Now we both wanna play

Oh yeah, why don’t you stay?
Oh yeah, Its time to play

When she crawls down the line,
I cannot clear my mind,
That's when she really starts to shine,
and we start to unwind.

Hoes step aside when I enter a room.
I sweep ‘em to the side like my shoes were a broom.
They know I’m the coolest ‘cause the way I strut.
I’m pumpin’ my fist, while adjusting my gut.
I got my stash, like a flash, smokin’ hash everyday.
I’m not taking out the trash; I’m just here to get laid.
So step up to the front, if you have a large bust
I’m not trying to confront, I just need to adjust.

Now its time to crazy, and its time to get wild,
Gettin crunk for ladies, gonna show em my style.
When I walk in the club, all the girls stare,
At my unbuttoned shirt, and my flowing chest hair.
Oh yeah we jumpin! We bumpin! On the floor we getting sick!
The bass in the club in thumpin as she rides on my stick!
We do some more shots, and now they’re burning my heart,
My stomach is twistin, and I hope I don’t fart.

You know that in the distant future, the robots will rise again
Now I’m just dancing with bullets again

There has to be a way out, of this god damned laser fire, but its not through you
You stole my heart and gave it to those evil fucking robots
And the robots and I are dancing with bullets again

Getting down on every night and day,
Sneak some sugar, sweet and salty taste
Suckin down a strong and sweaty drink,
I got to get my mouth around it!

Getting down just like a holiday,
Sneak some sugar, sweet and salty taste
Suckin down a strong and sweaty drink,
I got to get my mouth around it!

Getting down on every night and day,
Sneak some sugar, sweet and salty taste
Sippin on a tasty sav’ry treat
I got to get my mouth around it!
Track Name: I'm Gonna Jump in the Lake
I have made a mistake,
I tried to run from my fate.
Try as I might, I cannot escape,
I’m gonna jump in the lake.

I’m gonna jump in the lake
And there's nothing you can do to stop me.

Back in 04 when I was 18,
Looked at out my window, and I had a dream,
Drowning in emotions, far from fake.
College was strange and classes were tough,
Try as I might, couldn’t understand the stuff,
And I wanted, to find, an escape.
So far from home in a whole new world,
Hopeless and lost, and then I met a girl,
And my heart, she decided to take.
But she didn’t feel the same it seemed,
So I picked up my first guitar, and I screamed,
I’m going to jump in the lake.

I’m gonna jump in the lake
And there's nothing you can do to stop me.
Track Name: Smoke and Trombones
Its time to play the music and
Its time to light the lights,
Its time to smoke tobacco, and get in fist fights!
Its time to play the trombones,
It time to smell the smoke,
And chew on smokey sweet meats, that will make you want to choke!
Your eyes are gonna water,
Your throat is sure to dry,
The flavor of the smoke, it makes me want to cry!
We’re burning lots of reefer,
We’re drinking soju bombs,
When we wake up in the morning we’ll hit the trombone bong!

I thought that I was clever,
That nobody would know,
But as the smoke rises, my suspicion grows.
My trombone in the case,
With a concerning stare,
Are my eyes pink? The trombone floats into the air.
I tried to hide it,
I guess that’s how it goes,
When I’m smoking reefer, my trombone always knows.
The trombone and the smoke.

Party boy, cause I’m a party boy
I’m a party boy, oh yeah.
Track Name: Hombre del Sol
Red and yellow paint the sky up high,
Deception from the snake will cry
The tears drops fall, and I start to smile,
The wilting cactus, and the women sigh,

The sun is bleeding in the western sky,
Describe this feeling and I fail and try.
Tomorrow it will be the same,
There is only one man to blame.

See me, see where I go
Know me, know what I know
Hear me, hear what I’ve done
Love me, won’t it be fun?!

The sun is bleeding in the western sky,
Describe this feeling and I fail and try.
Tomorrow it will be the same,
There is only one man to blame.

El Hombre del Sol!
Track Name: Saturday Night
It was a Saturday Night, I was feelin alright.
But the TV was too bright, there was nothing to do but dream of you.
You’ll never guess what happened next:

I was scared out of my pants. I wanted to run to France.
Because the French have really good wine, so I’ll drink for the rest of time.
Guess what happened next?

Bandcamp Daily  your guide to the world of Bandcamp

Tasty gems from around the world, plus interviews with Kaitlyn Aurelia Smith and Nick Hakim.